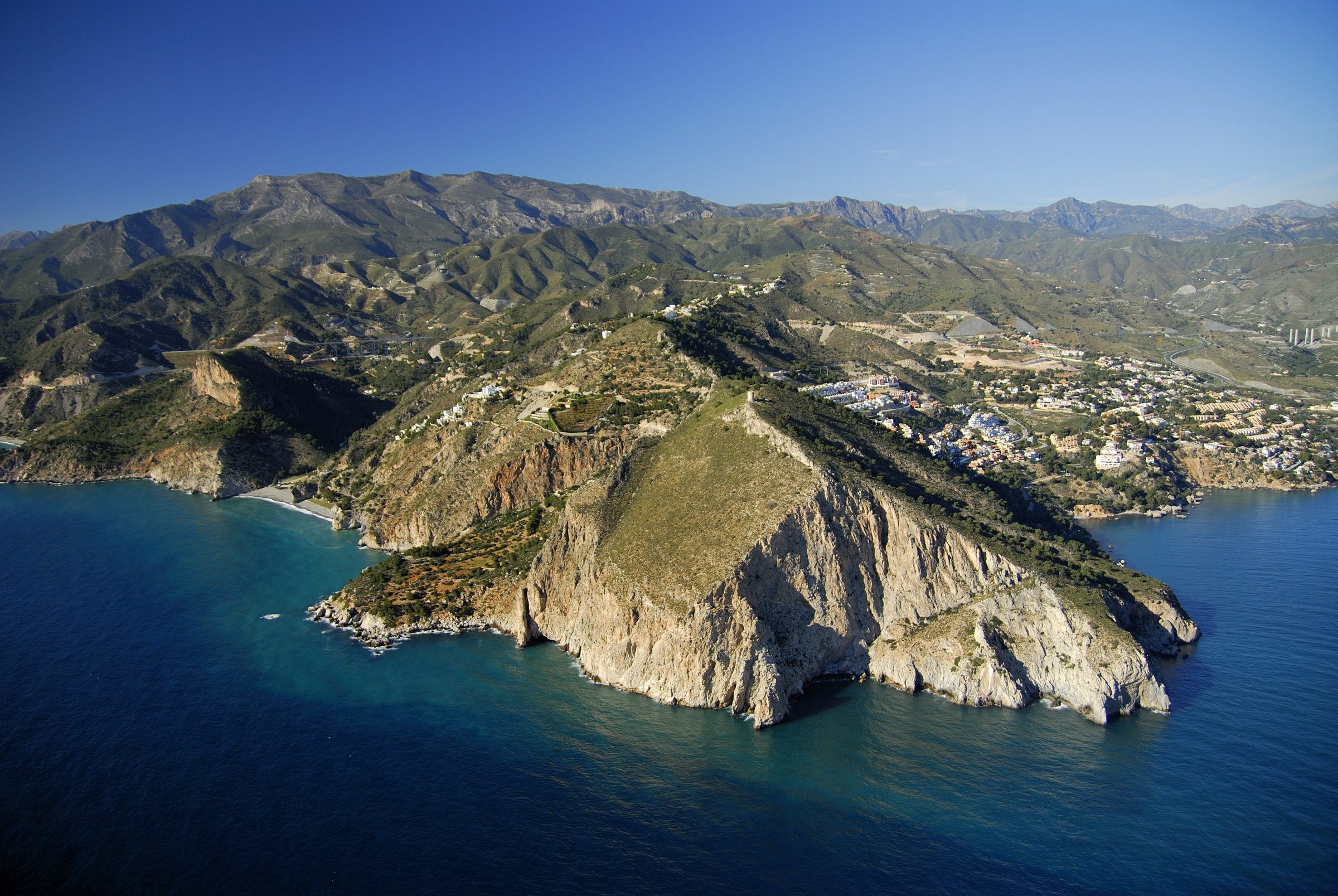 We present you the most hidden and beautiful coves of the Costa del Sol, accessible on foot, by boat, paddle surf or kayak.

Most of us bathers usually approach the beaches from a nearby car park where we have left our MalagaCar, don’t we?

This – undoubtedly very convenient – proximity of infrastructures also has a big disadvantage: the massive influx of bathers who invade the beaches with all their gear and the whole family to spend a cool day by the sea.

But if we are looking for something quieter, we will have to opt for wilder beaches, which are more difficult to access.

The coves that we are going to show you are mostly located on the eastern Costa del Sol, the Axarquia, which is characterised by a spectacular landscape of high mountains (La Maroma, the highest peak in the province of Malaga is over 2,000 metres high) and cliffs that end abruptly in the sea.

This rocky landscape has created unique coves that stand out for their crystal-clear waters, ideal for diving.

They are mostly small coves of coarse sand and even pebbles that are not as comfortable as the long sandy beaches of the western Costa del Sol, but precisely because of this, their waters are much cleaner.

Together with their less disturbed environment with beach bars and other tourist infrastructures, these beaches still maintain an enormous natural charm – hopefully for many more years to come!

The best coves on the eastern Costa del Sol

Almost all the coves we present are located between Maro and Nerja, the two easternmost municipalities of the province of Malaga, bordering the neighbouring province of Granada.

In the landscape you can feel the proximity of the great majestic mountain ranges Tejeda, Almijara and Alhama and the Sierra Nevada of Granada, a rugged and mountainous landscape that extends to the seashore.

The Paraje Natural Acantilados de Maro-Cerro Gordo is located there with spectacular views, wild nature, beautiful beaches and secluded coves that are difficult to access and even several freshwater waterfalls along a strip of about 12 kilometres.

Probably the last paradises of the Costa del Sol.

Cala de la Doncella is the most easterly cove in the province of Malaga and is definitely worth a visit. Difficult to access, it is a small, very sheltered cove. For this reason, most bathers approach it by kayak or paddle surf from one of the neighbouring beaches, El Cañuelo (Malaga) or Cantarriján (Granada).

If you come with your MalagaCar, prepare yourself mentally for a good 1 km walk to the beach. The effort will pay off for sure. But make sure you bring everything you need for the day, as you won’t want to go back to the car for sun cream or water.

How to get there: https://goo.gl/maps/ceB7eRNaKut4vedw6

A few metres from the Cala de la Doncella cove in the direction of Nerja is this larger cove, which also belongs to the Natural Park of the Maro-Cerro Gordo Cliffs. Due to its transparent waters, it is a very popular area for snorkelling.

The cove is composed of dark sand and gravel and has an extension of 400 metres. Due to its length, together with the existence of two beach bars, this beach is quite popular in summer.

In fact, in order to control the influx during the summer months, access by car is closed.

You can walk down to the beach for about 1.4 km or take the shuttle bus. Or come by boat and drop anchor for the day.

How to get there: https://goo.gl/maps/eHKWRh4suxM9rCSH6

This cove is actually two small coves separated by rocks. You park next to the N-340 road and walk down the cliffs for about 100 metres.

Due to its more difficult access, it is one of the unofficial beaches where nudism is practised in Malaga and like the others in the area, it stands out for its wild nature and crystal-clear waters.

It is an unspoilt beach of fine sand with no services of any kind.

How to get there: https://goo.gl/maps/wyYMJpHDWVLMoAvL9

We continue our way along the beautiful cliffs of Maro-Cero Gordo and arrive at Playa de las Alberquillas, a cove about 500 metres long surrounded by cliffs covered with vegetation.

It is one of the best unspoilt beaches in the region.

The car park is about 100 metres from the beach, which can be reached by going down a dirt track.

How to get there: https://goo.gl/maps/drdF8kRgH8ej8EXc7

The next cove on our way to Nerja is this small pebble beach. Due to the stones it is less frequented, but it is perfect for snorkelling, canoeing and paddle surfing.

It is a mixed beach, as it is also frequented by nudists.

The car park is next to the road and you have to walk down about 400 metres to the beach, as access is restricted to motor vehicles.

How to get there: https://goo.gl/maps/TkQjH2xscjEJjy7ZA

Situated in the village of Maro is a coarse sandy cove. It is a very popular beach with all services, surrounded by wooded hills. Kayak rental is available.

Between this beach and the next one in the direction of Nerja, the Caleta beach, there is a 15-metre waterfall of fresh water that falls directly into the sea.

You can also hire a kayak tour from Burriana beach in Nerja which lasts 2.5 hours with Educare Aventura (www.educare-aventura.com) for 24 euros.

How to get there: https://goo.gl/maps/ydLY5JaY4smRnZpk9

Also located in Maro, you have to walk down between crops with hardly any parking available and because of this isolation, it is one of the wildest coves on the coast. It has no services of any kind, so you have to take everything you need to spend a great day on the beach or snorkelling in its crystal-clear waters.

Nearby is the Maro waterfall.

How to get there: https://goo.gl/maps/Hxf9JTxvM2zbq5cg8

A tiny cove in Maro where the author used to go 25 years ago when nobody knew about it.

It has a small freshwater waterfall and with 5 or 6 people it has a maximum capacity. The access is through crops down a ravine on foot from the road where you have to park.

How to get there: https://goo.gl/maps/6p1Vyjzu5oYSAhET6

This cove belonging to Nerja has the peculiarity of a large rock from which you can jump into the sea from a height of 4 or 5 metres, and is therefore quite popular with young people.

It can be visited by kayak or paddle surf from the neighbouring Burriana beach.

The small dirt car park is about 200 metres from the cove and you have to go down a somewhat steep path and through large bushes.

A few metres from this cove there is an underwater cave that can be visited, the Sea Wolf Cave (Cueva del Lobo Marino).

How to get there: https://goo.gl/maps/dxeHsyPPFmZBMPKk9

The best coves on the western Costa del Sol

This cove with its characteristic rock, which has given it its name, is located on the eastern edge of Malaga city, in Cala del Moral. In addition to the beautiful rock, the beach has picnic areas and barbecues.

The car park is located about 500 metres away and the beach is accessed by a coastal path.

This cove is very well kept and is very popular in summer.

This cove is located in Benalmádena. Not to be confused with Las Viborillas beach, also known as Benalnatura, which is located right next to it, which is a purely nudist beach and one of the best on the Costa del Sol.

Both beaches are surrounded by cliffs and lush vegetation which gives them a special charm, very difficult to find on the western Costa del Sol.

Both coves are relatively small and therefore endure high occupancy in summer, but it is well worth a visit. In fact, the nudist beach is my favourite on the Costa del Sol.

In both coves there is the option to eat, in the textile cove there is a restaurant on the cliff top with views and in the nudist beach there is a chiringuito (beach bar).

Due to the gravel and rock formations the water is more transparent and cleaner than at most of the neighbouring beaches.

How to get there: https://goo.gl/maps/3qVPVT3iraatS2Td7

The best beaches on the eastern Costa del Sol

The best beaches on the western Costa del Sol

Discover the best beaches on the western Costa del Sol, from Malaga to Manilva: https://www.malagacar.com/blog/leisure/best-beaches-western-costa-del-sol/

The best nudist beaches on the Costa del Sol 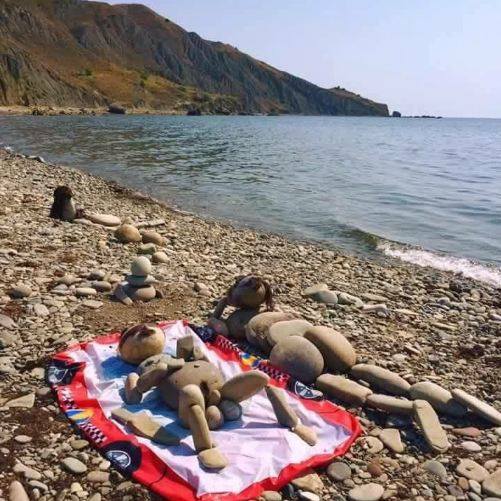 The province of Malaga already has 8 fantastic nudist beaches that we are going to present to you below.
https://www.malagacar.com/blog/leisure/nudist-beaches-malaga/

The province of Malaga has been awarded this year with more than 40 blue flags along its coastline, of which 35 are beaches, including for the first time an “inland beach”.
https://www.malagacar.com/blog/leisure/blue-flag-beaches-costa-del-sol/ Visiting Estepona – The Garden of the Costa del Sol