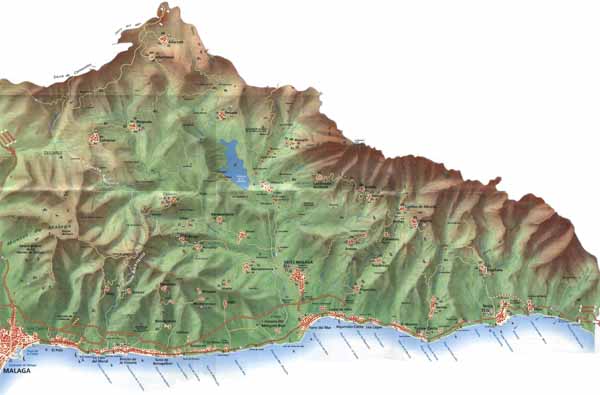 The Axarquia region of Andalucia is located in Malaga, comprising the eastern part of the province and extending from the coast to the interior of the province.

Among the towns that make up the Axarquia, historically we highlight Comares, being Velez-Malaga the largest municipality.

Comares, of Arab origin, was a strategic location that was eventually conquered in 1487 by Christian troops and which will offer on our visit a rich cuisine of which we highlight gazpachuelo and stew, well as its sweet wine, which has been recognized since antiquity.

Velez-Malaga was established as a town in the era of Al-Andalus, being a point of great defensive value and becoming one of the most important cities of the ancient kingdom of Granada which led to the birth of other villages in the surroundings after expanding the population outside the walls.

El Borge is another town in the Axarquia which keeps in its memory the fierce resistance to the Christian invasion, distinguished by its focus of rebellion.

Canillas del Aceituno
In this village we find remains of the old castle; a village with a long history and which during the time of Al-Andalus resisted heroically against the Christian conquest; of this area was born the presence of the Moorish bandit hiding in the caves of the region.

Frigiliana
Given its proximity to Nerja and its natural landscape, this is one of the recommended places to stay. The village has an old Mudejar town, an IX century castle and Roman and Phoenician remains.

Rincon de la Victoria
This town in the county has many monuments and attractions that show part of its rich history. The Roman site of Benagalbon with remains like the head of Bacchus from the II century has been declared site of cultural interest and is well worth a visit.

If you want to know more villages of the Axarquia don´t hesitate to visit our comprehensive travel guide and if you do not have your own vehicle check our prices for a Malaga airport car hire with fair fuel policy.