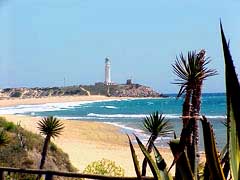 This municipality situated at about 66 kilometres from the capital city of Cadiz, is located near the Trafalgar Cape, where the famous ship battle under the same name took place in 1805. This municipality offers the visitor a wide variety of tourist attractions amongst which we can highlight its natural parks and a few very popular villages like Zahara de los Atunes and Caños de Meca, two places of a marked tourist importance.

This municipality is situated to the southwest of Spain and has its exit to the sea through its 25 km of coast with very touristic and natural beaches such as Zahara de los Atunes, Caños de Meca, La Mangueta beach and the beach of Los Cañillos, amongst others.

They have found remains of prehistoric settlers in Barbate, although it wasn’t until the arrival of the Phoenicians when a stable population commenced, turning Barbate into a commercial nucleus in the Mediterranean, famous in particular for its fish exportations. The municipality was already known by the Greeks during the 5th century before our era for the exportations of Garum, a very demanded sauce made with fish and that seasoned many dishes in the olden days.

The arrival of the Roman empire turned Barbate and the old port of Baessipo (possibly originally Celtic), which was situated in the mouth of the river, into a prosperous place thanks to the increase of the fishing industry already flourishing along the entire Mediterranean thanks to the Phoenicians. The security that the Roman ships provided in the area, avoided in a large degree the pirate incursions so the economy in Barbate increased considerably.

The fall of the Roman empire and the entrance of the Germanic villages didn’t stop the production and the growth of Barbate, who continued trading along the Mediterranean until finally the Roman empire fell in its totality, after which the insecurity returned to the coastal areas and the constant pirate incursions, leaving Barbate empty during great part of the Arab conquest on al-Andalus, remaining as a borderland against the attacks of the Christian armies.

After the permanent expulsion of the Muslims, the pirate incursions accentuated which was why they built the Santiago Castle by the river, and a series of towers that were guarded by a soldier to watch the coasts.

It wasn’t until the 18th century when Barbate was founded again, after the arrival of a Maltese merchant who placed the first fishing hut in the village. Barbate continued to grow until in the early 20th century with the help of the fishing activity, there was a great economic growth that ended up turning Barbate into the second fishing port in Spain.

As from 1960 the tourist sector began to gain importance and has continued to grow until today, being Barbate and its surrounding villages, places of great touristic importance both nationally and internationally, partially thanks to its beautiful beaches of white sand and its climate.

Things to do in Barbate 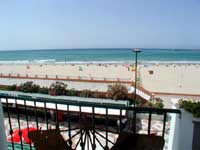 Amongst the best things that we can do in Barbate is of course to try out its rich gastronomy, amongst which we can highlight typical dishes of Barbate and Cadiz like the ones listed below:

If what you prefer is to have fun, in Barbate there are celebrations of great tradition:

Carnival
This pagan celebration is held during the month of February or March, a week after the famous carnival of Cadiz.

Semana Santa (Holy Week)
A Christian festivity during which they bring out the so-called thrones carrying religious figures through the streets of Barbate.

Fair of the Tuna
It’s a gastronomic fair that revolves around the tuna that has been celebrated since 2008 during the last weekend of May.

San Juan
A pagan celebration where the tradition is to go to the beach at night, build bonfires and burn dolls to celebrate the arrival of the summer.

Feria
The Fair of Barbate is celebrated around the 16th of the month of July and has plenty of fair huts to eat, drink and dance,as well as mechanical funfair rides.

The monuments that most stand out in Barbate and that we recommend a visit to, are:

Castle of Zahara de los Atunes
Built in the late 13th century, it was used as a defence against the pirates and where to store the necessary for the fishing and elaboration of the tuna, being Barbate the most productive place in Europe for centuries.

Tombolo of Trafalgar is natural monument in Barbate, a place of extraordinary beauty that includes the Trafalgar Cape.

The biggest Tenement House in the world is situated in Barbate and dates back to the 18th century.

How to get to Barbate

To get to Barbate from Malaga airport you have to take the Mediterranean motorway towards Tarifa passing through the entrance to Gibraltar, and then head towards Zahara de los Atunes. On the map below you can observe the recommended route to get to Barbate from Malaga. This route will take about 2 hours and a half approx. depending on the traffic.

If you need a car with GPS check out our car hire prices in Malaga.