The town is located within the Bay of Cadiz and 24 kilometres away from the capital. It is part of the known wine route of Andalucia and it has high quality beaches which mean it is well worth a visit.

Traces of human presence which have been found date the first human settlements to the Neolithic period. Excavations in the city centre show that the Phoenicians settled in the area and built the Hercules Temple in honour of the god Melkart on the Island of Sancti Petri, today this has disappeared due to a rebellion in 1145, but we know of it thanks to an anonymous text about the al-Andalus.

The Sancti Petri Castle was built on top of the temple ruins. Chiclana is part of the set of cities founded over 3000 years ago by the Phoenicians: Cadiz, Sevilla and Malaga; Part of these remains can be found at the Archaeological Museum in Cadiz.

After the Phoenicians the Greeks and Carthaginians arrived which were in the area till the arrival of the Romans which recovered the use of the temple to worship the god Hercules.

Little is known about the history of Chiclana from the 4th Century due to the lack of archaeological remains, although it is known the Chiclana acted as a border between the Arabic and Christian Kingdoms. It wouldn’t be until the Christian conquest of the al-Andalus till Chiclana was promoted and the discovery of America led to an increase in trade that increased the number of inhabitants of the town, which led to it becoming a resting place for the upper class of Cadiz.

The old part of Chiclana is dated to the 18th Century, during which most of the city was developed. The agricultural growth slowed Chiclana after the end of the Republic and the beginning of the Franco dictatorship, made the town more oriented to the service sector and the tourism sector with hotels, apartments and golf courses.

Chiclana has a lot of monuments which have been built over its history, from the Sancti Petri Castle to other religious buildings, palaces, museums and of course its natural environment for the lovers of nature.

Amongst the places we recommend you visit you will find:

Translated as Island of Holy Stones, this is because of it originally being a place picked for the site of a sanctuary of the god Melkart. This small island is currently where the castle is and the Sancti Petri Lighthouse, which was built in the 18th Century by the Christians to defend the coast from the constant pirate attacks, which were very common in those days.

The temple built before the castle on the island was very popular in the past, it is said that underneath the temple were the buried remains of Hercules and the relics of other Greek heroes. Many famous people in the past went to the temple to worship, some of these characters included Anibal and Julian Cesar, who while at in the sanctuary dreamt of world domination. The temple was used until the arrival of the Visigoths, where it lost its great past.

The ownership of the island was in dispute between Chiclana and San Fernando, with this been chosen although it’s nearer we decided to include it with Chiclana … This is because if you visit Chicalana you can’t let the opportunity pass to visit the island or at least see it from the coast. 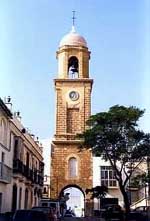 This building in Chiclana was built during the 18th Century on top of an old door the Villa.

Built in during the 16th Century and was used as a defensive tower in the begining of 19th Century.

Chiclana has a great number of religious buildings which are dated from the start of 15th Century with oldest in the town is the Santo Cristo Chapel untill the 18th Century with San Juan Bautista Church or the Santa Ana chapel.

In Chiclana we will find the following museums:

- Chiclana Museum: With diverse exhitibitions about the history of the town.
- Museum on the Factory of Marín Dolls: This shows us the history of the dolls Factory which was founded in 1928.
- Francisco Montes Paquiro Museum: Museum dedicated to the bullfighter who was born in Chicalana in 1805.

Chiclana has a past in wine dated to the 4th and 8th Centuries BC. It has a lot of wineries which are visited by lots of people every year and they use traditional methods in winemaking. 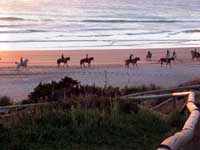 The beaches of Chiclana are one its main tourist attractions: Barrosa Beach and Sancti Petri Beach are situated in a natural park.

There are 6 golf courses in the town:

How to get to Chiclana from Malaga

To get to Chiclana from Malaga we have to take the ‘autovia de Mediterraneo’ until we reach Algeciras, from this point we can decide on wherever to take the coast road which passes Tarifa or the road which crosses the Alcornocales y Medina-Sidonia Nature Park.

If you arrive at Malaga and need to hire a car at Malaga airport, don’t doubt in checking our prices. Hiring a car is recommended to get to know more about Andalucia and around Malaga.