This town of Cadiz was founded in 1483 by the Catholic Monarchs who needed a royal port in the area. A visit to Puerto Royal will show streets that follow the same old layout with which they were built; a path that leads to monuments such as the Market and Caja del Agua, built during the eighteenth century, and other religious buildings of the century.

Puerto Real offers entertainment you can find in its cultural centres or theatres, and a rich cuisine based mainly on seafood, so typical of Cadiz.

The town of Port Royal as a population centre began with its founding in 1483 by the Catholic Monarchs in order to build a port for the kingdom in the Atlantic. The population was part of Jerez until years later they built the town hall and became independent.

Puerto Real has survived the War of Independence, although the castle of St. Louis finally succumbed to the French.

The town's industrial growth was slowed by the Spanish Civil War until the end of the dictatorship regained industry and its town hall was one of the first in the community demanding the autonomy of Andalusia.

Tourism and things to do

Among the places we recommend to visit in Puerto Real is the Castillo de San Luis, which was damaged as mentioned earlier in the battle known as "the hundred thousand children of St. Louis".

Other places to visit are:

Church San Jose
Built during the eighteenth century by the guild of carpenters now houses a cultural centre.

El Porvenir
A historic garden which was built during the nineteenth century.

Market from the eighteenth century, possibly the oldest in Spain. 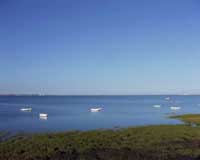 Natural Park of Las Canteras
The only reserve of Chameleons in Europe.

Gastronomy
Another major attraction of the town is its cuisine, a cuisine that could be the representative of the Bay of Cadiz with dishes using products of its countryside and the sea.

Among the best known and popular dishes of Puerto Real are the Pinyon Partridge, its fish and seafood: marinated dogfish, Chickpeas with prawns, Clams...

How to get to Puerto Real from Malaga

As with other destinations of Cadiz you will have to decide whether to follow the coastal route or the shorter one crossing Sierra de Grazalema Natural Park, through Alcala de los Azules and Paterna, bordering by Medina-Sidonia in direction Jerez, to the junction indicating the direction to Puerto Real.

On the map we have marked this route for being the one that leads most directly to Puerto Real from Malaga.

Remember to check our prices for car hire in Malaga and transfers from Malaga to Cádiz.

back to: car hire Malaga airport