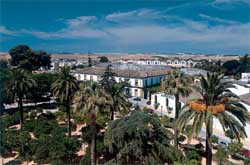 For centuries Jerez has been a city of great importance, which in recent years has been outstanding worldwide for its famous Sherry wine, a wine that has grown in its fertile lands.

Jerez Airport (used by more than a million passengers each year), the race track and the many conferences that take place each year combine in a modern city that has retained its traditional charm. 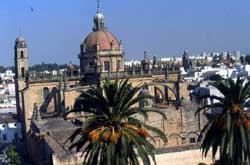 The cities´ artistic tradition has been preserved over time in examples as clear as its streets full of monuments, being some of the most characteristic the baroque Cathedral of Jerez and the Alcazaba, a Moorish legacy which has undergone a major restoration.

Jerez has been a stopping point for many civilizations throughout history: Phoenicians, Romans, Arabs and Christians have passed through this city and have left their cultural legacy.

It is unknown the exact moment in which the population settled in this area, possibly the Tartessians or Phoenicians were the first ancestors of the people of Jerez. 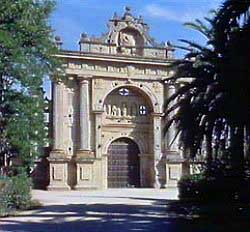 From the twelfth century with the arrival of the Arabs, took shape what is now the old city and walled perimeter. This wall was extended after the conquest of the city by the Christians during the thirteenth century. It was from this conquest when they built the largest number of religious buildings characteristic of that period in order to remove all traces of Jewish or Muslim belief.

From the nineteenth and twentieth century began the destruction of certain religious enclosures such like a group of convents, and the construction of houses and squares that eventually destroyed parts of the ancient defensive walls and gates of the city.

The growth of the wine cellars started from the nineteenth century, reaching great importance with the creation of the railway in 1854, which facilitated the transport of wine from Jerez to the rest of the peninsula.

Things to do and see in Jerez 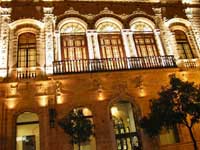 From horse shows at the Royal Andalusian School of Equestrian Art, to show races at Jerez circuit and the popular Jerez Fair.

12th Century fortress, former residence of the Caliph of Seville. Within is the Moorish mosque, which of ata María by Alfonso X the Wise, conqueror of the city.

Constructed over the principal Moorish mosque. Of particular interest among the image it houses is the 14th century figure of Christ, "Cristo de la Viga". Zurbarán's painting of "La Virgen Niña" (Our Lady as a Child) is in the Cathedral Museum.

Situated in one of the gipsy quarters of Jerez. In Elizabethan-Gothic style, it has a fine altarpiece by Martínez Montañes and José de Arce. It dates from the 16th century.

Built in 1575, this combines Plateresque with the Mudejar style which is typical of Jerez.

On the same square as the Town Hall, this Mudejar church was erected in honour of the Patron Saint of Jerez.

In the late Gothic style, the church stands on a square which contains several of the town's historically and architecturally most importants buildings, including the Archaeological Museum.

From the Almohade - Almorávide period, a good part of the structure still stands.

From the period of the Reconquest, its fne cloisters provide a setting for numerous expositions.

Dating from 1268, this church houses and image of the Virgen de la Merced, Patron Saint of Jerez. The alcove in which the image stands is one of the finest examples extant of craftmnship in silver.

This stands in other old quarter Jerez and dates from the 13th century, with later additions. The portal is in famboyant Gothic style. The tower dates from 1665. The church is designated a National Monument.

One of Europe's best collections

Founded in 1476, this is the finest architectural complex in the province. It has a beautiful portal un Greco-Roman style. The church, in Gothic style, was completed in the 18th century.

Horses have occupied a special place in Andalucia since remote times, from the Middle Ages where games where practiced to serve as training for war, until the current day where these games which were practiced have evolved into the horse shows.

This museum tries to show the visitor the origin and evolution of equestrian art all around the world.

This museum has interactive system in English, French, German and Spanish. The texts which will find will be both in English and Spanish.

Besides, they are worth a visit Domeq Palace, The Royal Andalusian School of Ecuestrian Arts and the Bullring.

How to get to Jerez de la Frontera

The access road is well connected with the rest of Andalusia. Jerez International Airport is modern as well as its recently restored train station with connections to Santa Justa Seville, Madrid and Cadiz and elsewhere.

To get to Jerez from Malaga take the direction towards Gibraltar, from where you can cross the Sierra de Grazalema Natural Park if you want to take the shortest route through Alcala de los Azules and Paterna de Rivera; you also have the option of driving along the coast passing through Tarifa and Chiclana.

On the map below you can see the chosen route in detail: