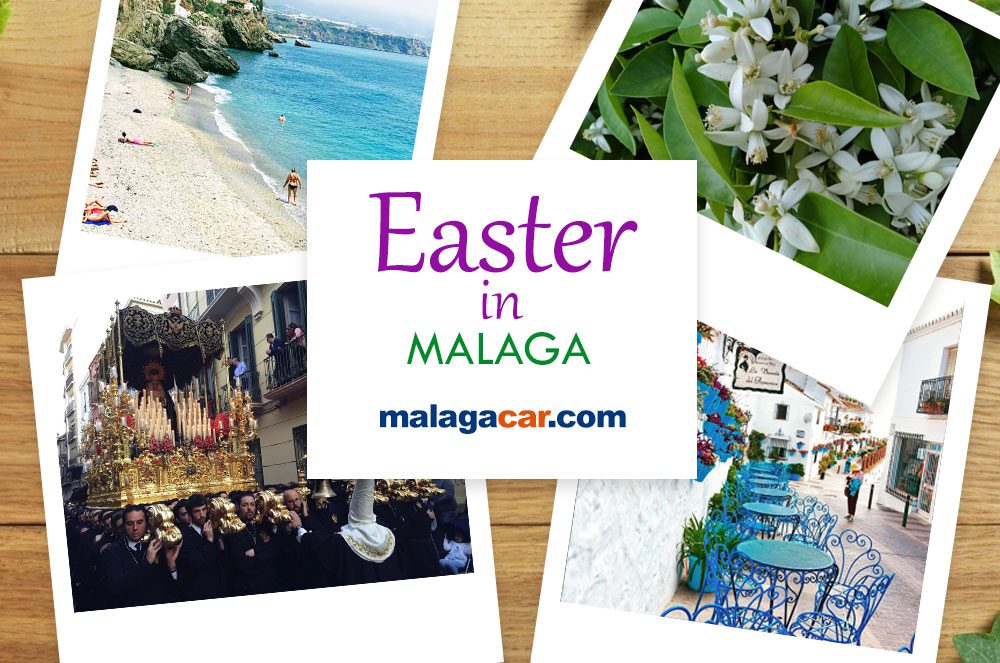 These dates, which vary each year, not only mark the beginning of the tourist season on the Costa del Sol. It is also probably the most important date in the religious calendar.

In fact, Malaga’s Holy Week is considered one of the most important in Spain. This celebration attracts thousands of worshippers and tourists every year in a deeply moving spectacle.

Whether you want to come to Malaga at Easter to enjoy the good weather and perhaps take your first dip. Or you are attracted by the magnificent processions in the centre of Malaga, here you will find everything you need to know.

The weather in Malaga at Easter

As mentioned above, the dates of Easter vary from year to year and can therefore take place in either March or April.

This year we have a very late Easter Week in the middle of April. At this time of the year, we tend to have very sunny weather with an average of 20ºC during the day. But it still tends to cool down at night.

It’s also a good idea to pack a mackintosh, as historically it always rains one day or another. And don’t forget short-sleeved shirts and sunglasses because the sun is already shining brightly.

If the weather is good, you’ll see many locals enjoying the beach to work on their tans. You won’t see as many people swimming, as the sea is usually quite cold with an average temperature of 15/16ºC. However, a short dip in the sea makes you feel like new-born and also boosts your immune system!

What if it rains?

Normally, if there is some instability, it will be of short duration. And rather than rain, it will be showers and then the sun will come out again. In fact, this happens so often that we also have some glorious rainbows in Malaga at this time of year.

If you really do get caught out on a bad day during your stay in Malaga, remember that you are on holiday. So what better way to make the most of the day than to soak in the warm waters of one of the best Spas in Malaga!

Traditionally the Malaga Holy Week starts with the first procession called “La Pollínica” on Sunday 10th April at 10:15 am. It ends with “El Resucitado”, at 10 am on Sunday 17th April.

There are many processions every day in the centre of Malaga. Except on Saturday 16th April, when there are no processions.

This video, shot in Ronda, gives you a very good impression of the enormous emotional intensity with which the devotees live this event.

Each brotherhood departs from its own church. However, they all have a common route that passes through the historic centre of the city, passing through the following points:

At the beginning of Calle Carretería there are steps that are popularly known as Tribuna de los pobres.

Historically, people who could not afford to buy a seat in the official grandstands (very coveted) used to sit on the steps there.

Today, it is one of the most popular places to see the thrones. An authentic place to feel the popular fervour. However, you will have to go in good time to get a spot (standing, of course).

Tips for seeing the processions in Malaga

First of all, don’t even think about driving into the city centre on these dates.

Although the central car parks are open, your car can be locked inside for many hours, as the streets are blocked off during the processions (which is basically from 4 pm until late at night).

When you go by suburban train (which has a special timetable throughout the night), be prepared for crowded trains.

Which brings us to the next point: If you’re agoraphobic and crowds aren’t your thing, don’t go to Malaga, it’s just madness.

Be prepared to walk (albeit at a snail’s pace), so comfortable walking shoes are a must.

It wouldn’t hurt to take a bottle of water with you. The bars and cafés are also packed with people and you may have to queue for a drink (or the toilet).

Did you know that… ?

In Malaga a procession generally consists of two “thrones”: that of Christ and that of the Virgin. With the exception of the very impressive Servitas procession on Good Friday, where the lights are switched off as the procession passes by, accompanied by a single drum.

The thrones themselves are solid wooden structures weighing several tons. The average weight carried by a man on a throne is about 20 kilos for many hours; in some cases exceeding this weight.

Many processions begin in the afternoon, but the spectacle becomes even more impressive at nightfall, when the passing of the thrones is accompanied by hundreds of candles.

The average length of the processions is between 6 and 12 hours, during which time the men on the thrones carry this considerable weight.

Not surprisingly, the culminating and very emotional moment is the enclosure, when the throne finally returns to the parish from which it left.

Why are there characters in the procession that look like the Ku Klux Klan?

This pointed cap is very similar to what this American racist group wears. It is called Capirote and in fact has its origins during the dark years of the Spanish Inquisition. Than, the condemned had to wear it to submit to public humiliation. The cloth in front of the face ensured the anonymity of the penitent’s identity.

The fact that Easter is celebrated every year on different dates. That is due to the fact that it is governed by astronomical variables of pagan origin. These were adopted by the Catholic Church.

Thus, Easter Sunday is always celebrated on the Sunday after the first full moon following the spring equinox (21 March). Interesting, isn’t it? 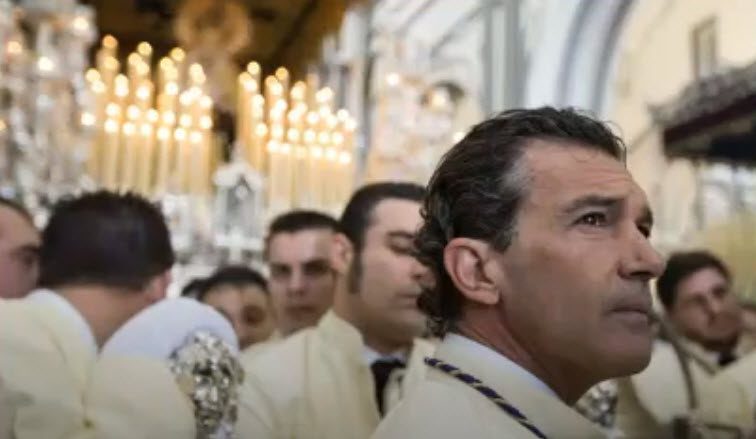 Antonio Banderas is a fervent devotee of Holy Week and an active member of the brotherhoods of thrones. He joins them every year.

Last year’s pandemic left us with such unusual images as this one.

Since Easter Week 2021 had been cancelled, it was held in November. Coinciding with Halloween and the Christmas lights already installed in Calle Larios. 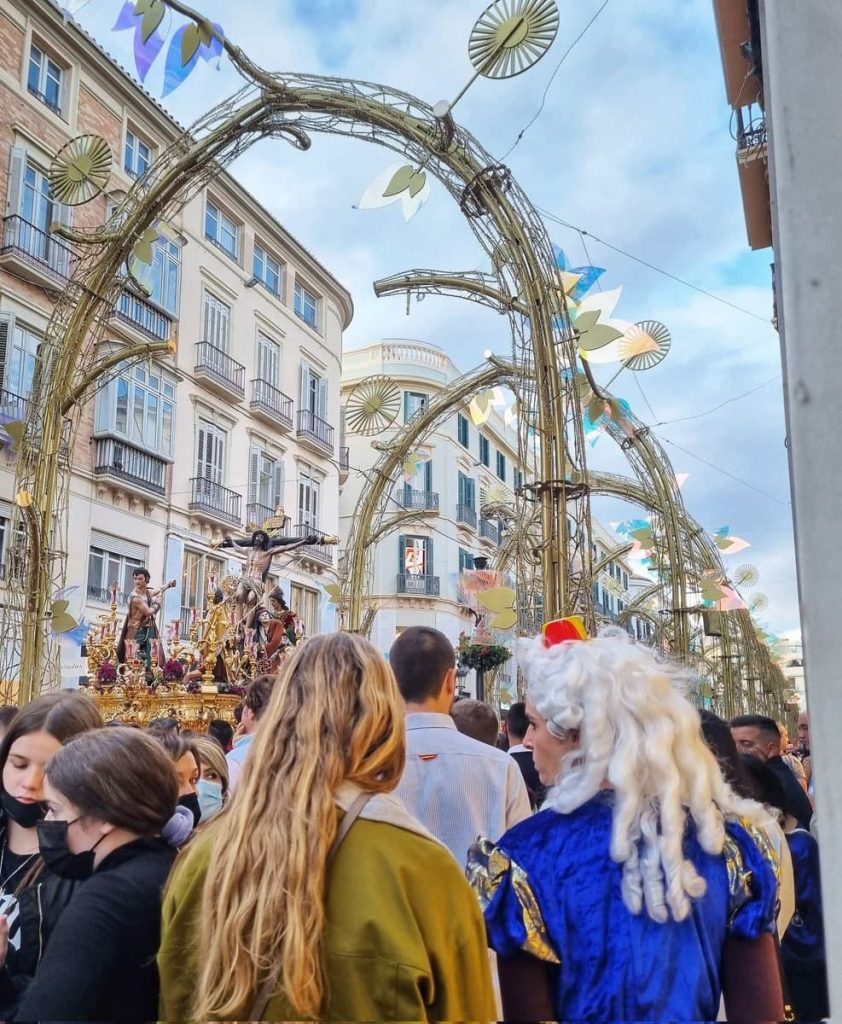 As we mentioned before, these dates mark the beginning of the season in Malaga and we can enjoy a great variety of Beach Bars in Malaga, the best Beach Clubs open their doors again.

Due to the generally good weather and mild climate, there are endless possibilities to enjoy the outdoors: Whether we dare to take the first dip of the year, as if we want to enjoy nature.

Discover the inland of the province of Malaga

Due to the current situation, nature destinations in the interior of the province of Malaga have become very fashionable. We can enjoy many places with a very high natural value in the province, although we advise you to avoid certain natural places during the weekends due to overcrowding. Yes, we are not exaggerating.

In addition to the excursion destinations already available on our Blog, we are going to publish more articles about beautiful inland places in the province of Malaga that are worth visiting, especially now, in spring, discover more in our Blog!