This municipality in Malaga is one of the villages that we can find in the region of the Ronda Mountains, 130 km away from Malaga capital. Today, its population is gradually decreasing, with a current figure of only 279 inhabitants, of the 316 that lived there back in the year 2000.

The municipality is divided into two areas, the northern area, that used to have a great amount of Holm Oaks, although due to the mining activity during the 18th century, today it’s completely deserted; and the southern area, which is where the whole farming activity is concentrated.

Alpandeire has been inhabited since prehistory, although the urban nucleus was formed with the arrival of the Arabs in the 8th century, and this influence can be witnessed today with the layout of its streets. 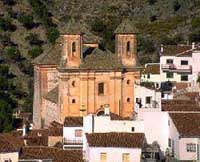 The end of the Arab reign took place as from the moment that Ronda was conquered in 1585 and king Felipe III began to repopulate after the vast majority of the Moorish population were expelled.

Alpandeire was the home of many renowned bandits of the Ronda mountains, like Antonio Barbaran Jimenez (El Barbaran) for example, who is said to have lived in the area during the first half of the 19th century, and guided a dozen men. This municipality has a great amount of legends and stories that have prevailed until our time.

In Alpandeire’s recent history we must mention the figure of Francisco Tomas de San Juan Bautista Marquez Sanchez, also known as Fray Leopoldo of Alpandeire, of the Capuchinos’ order, who became famous for his selfless help towards those that were most in need. Today, his house of birth is the most valued artistic patrimony in the village.

We recommend a visit to the church of Alpandeire, built in the 18th century and still unaltered since then. 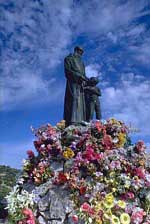 Legends of these mountains

As previously mentioned, Alpandeire has countless legends, and amongst them we’ll find the legend of the Pospitara Treasure. It is said that in the year 1598, wandered a man with half Christian and half Moorish clothing, with a beggarly appearance and a bagpipe, which he played whilst he sang and begged; that instrument caused admiration amongst the locals that had never seen anything like it.

That strange beggar, when it got dark, sought shelter in a stable on the way to Pospitara, the place that he had asked directions to when approaching the people he met on the way...and when everyone was asleep, late at night, the beggar would head towards this small village where he would find his way to its fountain, and from there he would count 30 steps to right and began to dig, always very carefully so that nobody would see him.

It is said that in the end he came across a crock (a clay vessel), which somehow broke and showed a great amount of jewellery and gold and silver coins; after filling his backpack and other bags with such a precious treasure, he continued his journey and disappeared.

After a few days, some farmers found what was left of the clay jars and some gold and silver coins, pulverised gold and a hoe...from that day onwards no one ever saw the mysterious musician ever again.

What’s true in this or any other legend of hidden treasures in Andalusia?

It’s a well-known fact that once Alpandeire was conquered, the Moors were transferred, and many of them would hide their money and jewellery underneath the fields of the area to avoid getting robbed.

The journey of this mysterious musician with a beggarly look was made by following the instructions given to him by his parents to dig out the hidden treasure.

Today, if you are to visit Pospitara, you’ll find a few old abandoned country houses and remains of tiles, ceramics and vessels of domestic use; other items were found like swords and smoking pipes that the Moors used to smoke the ‘kifi’ with back then.

How to get to Alpandeire

This municipality in Malaga province is situated in the Ronda mountain range; thus you have to head towards Ronda and then follow the directions to Alpandeire. If you wish, you can hire a car in Malaga with us and check out the Google map here below to find out exactly how to get to Alpandeire from Malaga airport.

We hope you enjoy your visit, it’s one of those places you’ll enjoy and that will transport you to the past.